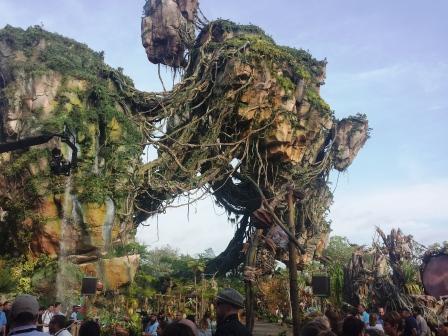 Pandora – The World of Avatar is now open at Disney’s Animal Kingdom in Orlando Florida, USA! The global media and dedication event on May 23rd was attended by dignitaries from Disney and Lightstorm Entertainment, as well as the principle cast from the film and most major news organizations and movie industry media. It was an extravaganza that only Disney can bring. The attendees were wined and dined in high fashion and Disney took the opportunity to showcase some of their other new shows and attractions.

The Global Media Event lasted until well after dark. If Pandora is amazing in the daytime, it is absolutely mind-blowing at night. The bio-luminescent plants and animals make it seem like a completely different place. The floating mountains and lush alien rainforest really is another world. You are on Pandora.

Placing Pandora at Disney’s Animal Kingdom is a perfect choice, because Avatar also has a theme of conservation, environmental responsibility, and respect for the natural world and indigenous cultures. This continues at Pandora almost everywhere you look. The setting is a generation later than the film and the Pandoran Conservation Initiative (PCI) has now been created. PCI’s focus is on reversing past habitat destruction and showing how even small changes in the ecology can cause decline or even collapse of dependent species up the food chain. On Pandora, a keystone species is the ikran, and the PCI is very busy learning how the excesses of the RDA and other activities have harmed their habitat and are creating courses of action to reverse the damage and restore Pandora. Of course, this kind of thing is also happening on Earth, here and now. The Message of Pandora that was started by Jim Cameron in 2009 continues with the power of Disney behind it. Beyond just raising awareness, Disney has announced a new $1,000,000 program connected to The World of Pandora that will aid in restoring habitats for animals here on Earth.

Not incidentally, the Na’vi language has a significant part in the presentation of Pandora. Many people will be exposed to Na’vi for the first time and likely will visit LearnNavi.org to learn more. Here they will find our amazing community, and we hope will be rewarded with everything they want to know about Na’vi.

See you on Pandora!  Siva ko!