James Cameron’s upcoming film Avatar tells the story of a human who comes to live within an alien race known as the Na’vi, eventually becoming a human-Na’vi hybrid know as an avatar.

For professor Paul Frommer — who created the Na’vi language for the film — the idea of living as part of two very different worlds is something he is also familiar with. 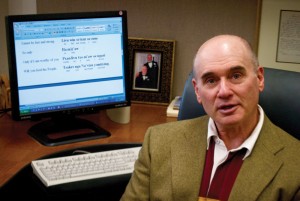 Frommer, a longtime faculty member at the Marshall School of Business who is also a linguistics specialist, conceived an entirely new language to be spoken by the Na’vi that inhabit the planet Pandora in the film.

To craft a new language, Cameron turned to the USC College of Arts and Letters’ Department of Linguistics in 2005, which recommended Frommer for the job. Two weeks later, Cameron and Frommer sat down to talk about the possibilities. Frommer joined the production team that same day.

“He wanted a complete language, with a consistent sound system [phonology], word-building rules [morphology], rules for putting words together into phrases and sentences [syntax] and a vocabulary [lexicon] sufficient for the needs of the script,” Frommer said. “He also wanted the language to be pleasant sounding and appealing to the audience.”

Frommer, who co-authored the book Looking at Languages: A Workbook in Elementary Linguistics — which includes data from 30 different languages — said he found the opportunity challenging yet incredibly fascinating.

For the next four years, Frommer worked on creating a language that sounded complicated but was also engaging.

“I didn’t quite start from zero, since Cameron had devised 30 or 40 words of his own for the original script — some character names, place names, names of animals, etc.” Frommer said. “That gave me a bit of a sense of what kinds of sounds he had in mind.”

Frommer created three different sonic impressions of the language that included many sounds uncommon in Western languages, known as “ejectives,” which are popping-like sounds that come from the glottis in the larynx. He also made sure to include distinctive elements that differentiate his language from others. Cameron chose one, and the rest of the conception was up to Frommer.

He then created the morphology and syntax.

“The verbal morphology, for example, is achieved exclusively through infixes, which are less common than prefixes and suffixes,” he said. “And the nouns have a system of case marking, known as a tripartite system, that’s possible but quite rare in human languages.”

Once the basics of the language were initially conceived, Frommer, who holds a Ph.D. in linguistics from USC, combined his expertise with the likes of Hollywood and in many ways became an avatar himself: an academic-Hollywood hybrid, who then found himself working on an actual film set.

Frommer worked with many of the film’s stars, including Sam Worthington and Sigourney Weaver, and coached their progress with the pronunciation as well as observed instances on set that required rewrites.

“There were long stretches of boredom punctuated by instances of terror,” he said, in regard to changes in the script that would often require his immediate help.

His language also caught on with many of the production crew, who all seemed to easily adapt and pronounce the Na’vi word “Skxawng;” its “kx” popping sound translates into English as “moron.”

Amidst all of the momentum required for a film with a monstrous budget like Avatar, Frommer found the most thrilling opportunity of working on a film set to be the time spent perfecting the language.

Although Frommer is the only one who completely understands the language, it’s possible it could catch on in popular culture is quite high, similar to the longevity of the Klingon language of Star Trek — which is the gold standard for sci-fi languages according to Frommer.

“There’s even a translation of Hamlet into Klingon,” Frommer said. “If Na’vi ever came close to that kind of following, I’d be delighted.”

Knowing Cameron and significantly contributing to one of the most anticipated films in recent years might sound perfect to would-be filmmakers, but for a man fascinated by verbal communication, the real glory comes with his creation of a living language.